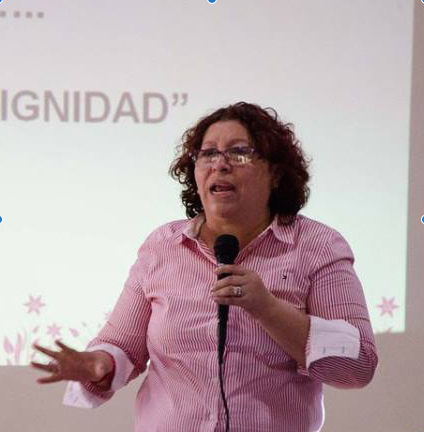 Next in our series following on from our event at WTM London: a summary of Sandra Ramos’ presentation. Sandra is founder and Director of  the Maria Elena Cuadra Movement in Nicaragua (MEC), one of the most dynamic feminist organisations with a focus on women’s labour and human rights. She spoke about MEC’s work with indigenous, rural women in the tourist sector on the island of Ometepe.  This beautiful island has many attractions, including beaches, lagoons, volcanoes, rivers and rich cultural diversity.

Female employment is mostly concentrated in the hotel and restaurant sectors and some women also have small shops selling to tourists and/or tourist establishments.  However, due to low pay, insecure, seasonal employment and lack of access to credit, many women mígrate to neighbouring countries, especially Costa Rica and Panama in search of better job opportunities. The situation of indigenous women in the rural areas is even worse in that they have very limited access to and/or control over resources due to deep-seated patriarchal values and traditions prevailing in these traditional communities. Very few women have access to land or credit, both of which are needed in order to be integrated into the tourism sector, either as homestead providers for visitors or as food producers for the hotels. Consequently, only a very limited number of the indigenous female population of Ometepe island  are currently able to benefit from  tourism opportunities on the island. In its work with the women of Ometepe, which began in 2012, MEC has adopted a holistic approach aimed at building women’s confidence and self-esteem, as well as their knowledge and capacities in relevant areas, such as livestock rearing, food production and so on.  MEC works with women, both in the field and in the classroom.  Their work on confidence building, includes  raising women’s awareness of their gender rights and the rights of indigenous women, such as the right to freedom from violence and the right to non-discrimination.  Women who graduate to the next stage participate in sessions provided by the Leadership Academy, from which over 100 women have graduated since they began in 2012. There is also a Livestock Academy where experts in the field have provided training on handling livestock, which has traditionally been viewed as men’s domain. This has had a huge impact, both on men’s and women’s perceptions of their position in society. Other forms of training include economic literacy, which is aimed at enhancing women’s understanding of local and national economic processes to enable women to lobby municipal governments on policy and funding matters that affect them. In addition, MEC have brought media experts with cameras and other equipment to train women in public speaking and speaking for the camera.

“In my view, tourism can act both as a vehicle for the empowerment of women, but it can also result in the reproduction of existing forms of gender subordination. In order for tourism to have a positive impact on gender equality, it must be accompanied by factors that contribute to the holistic empowerment of women.” Sandra Ramos

In her conclusion, Sandra listed some of the measures that are called for in order to achieve a more gender-balanced approach to rural community tourism in Nicaragua and elsewhere. These include: